Jackson Civil Engineering is an established nationwide company who specialise in large scale infrastructure projects such as highways, bridges, and ports.
One of the projects the firm is currently working on is the continuous maintenance of the M11 Motorway. The M11 connects the East Midlands with London. This project is a contract for a 10 year period which requires a team of up to 20 staff working around the clock. Jackson has created a site to act as a base near the M11 which consists of offices, workshops, bedrooms, showers, and a canteen.
Due to the location of the site, it was impractical to get a connection to the National Grid. In fact, in order to do so, it would involve running a connection either over or under a six-lane motorway. This would be extremely expensive!
Jacksons opted to rent a diesel generator to provide power. Due to the nature of the site, there was a huge variance in the amount of power required at any point. It could be just a few laptops plugged into the sockets in the office at one moment, followed by 4 showers running along with a kettle and a microwave at the end of a busy night shift. This meant that the site required a large 70kva generator. They were spending just over £30k per year on rental and fuel, annually to provide power to the site.
One of the major issues that Jacksons faced whilst relying on a generator as the only power source, was that especially during the colder months there were many times where the generator failed and they were left without any power. A generator has a lot of moving parts and as a result, it is inevitable that downtime will occur. With up to 20 people on-site at any given time it was a huge expense to have staff who were unable to work and it also placed their project behind schedule.
In 2018, Adam knibb joined Jacksons on an internship whilst studying for his Ph.D. Adam was investigating possible savings and efficiencies that could be achieved within the M11 maintenance project. Adam spotted that Jacksons had the opportunity to save thousands of pounds a year by installing an off-grid solar PV system at the site.
Adam investigated companies online found Ian Hewson from Off Grid Engineering. Ian got to work designing the perfect off-grid solar PV system, which was capable of meeting the energy demand.
Due to the unique nature of the site, there were a few challenges in particular that needed to be overcome in order to ensure the project was a success.
The first challenge was finding a suitable place to mount the solar PV panels. The only space on site that was suitable, was the roof of the containers which were acting as offices. We were unable to penetrate the roof due to plasterboard being fitted directly onto the ceiling, and with only 0.6mm of steel in the centre of the roof, the containers were not strong enough to hold the weight of the panels if they were installed in the traditional flat roof mounting method. This involves placing them on trays filled with ballast. Ian designed and developed a bespoke rail system for Jacksons, which diverted the weight of the panels from the centre, to the edges of the containers which were much stronger.

The other challenge was keeping the 3 separate phases balanced, whilst having the ability to boost the supply if there was a short term need for more power. Ian resolved this by using Victron 8kva Inverter Chargers. They have the ability to provide a boost of power if required, taking their power from 8kva right up to 15kva for short bursts of time.

The installation took less than 2 weeks to complete and went live on the 10th of April 2019. With almost a year since the system was installed Jacksons have found they have benefitted greatly from investing in off-grid solar PV.

Notably, they have saved a significant amount of money, by not keeping a large generator running 24/7. They estimate they have saved approximately £25k during the last 11 months when combining both fuel and generator rental costs. Ian was able to complete extensive ROI reporting prior to starting the project which included a break-even point. Ian predicted that the project costs would break even after 2.5 years meaning that there would be a saving of over £130k over a period of 7 years, taking into account the amount spent on the off-grid system with a smaller backup generator. We are pleased to report that over the last 11 months the now significantly smaller generator has only been turned on for an average of 3.5 hours per day instead of 24 hours per day and the project is on track to outperform the predicted ROI. It is important to bear in mind that Jacksons were restricted with regards to the number of solar PV panels they could install as they had limited space on site. If there was more space Ian would have recommended installing twice the amount of PV taking the total solar generation capability to 20kW instead of just under 10kW.

Another huge benefit is providing visibility on what energy is required and when. Prior to having their system installed, Jacksons were stuck in the cycle of blindly filling up their diesel tank every week without being able to monitor the level of energy required by individual sections of the site. Due to having access to the Victron Remote Management Platform, they now have a comprehensive energy use profile. This has been extremely useful in identifying other cost-saving opportunities, such as replacing their convection heaters with infrared heaters which require far less energy. 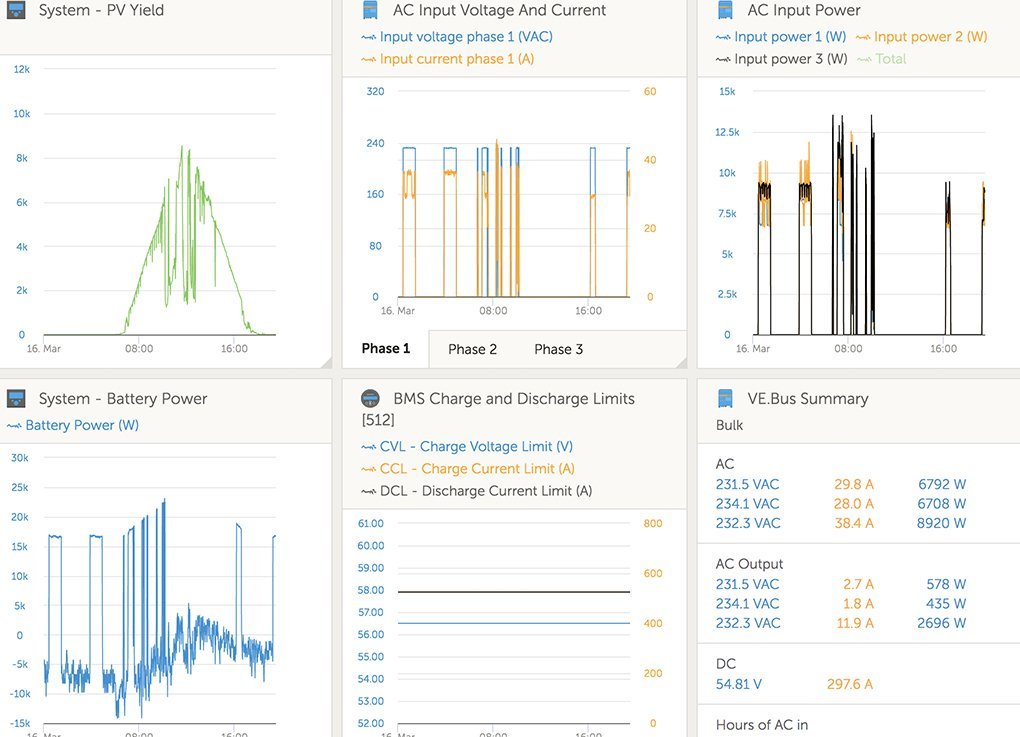 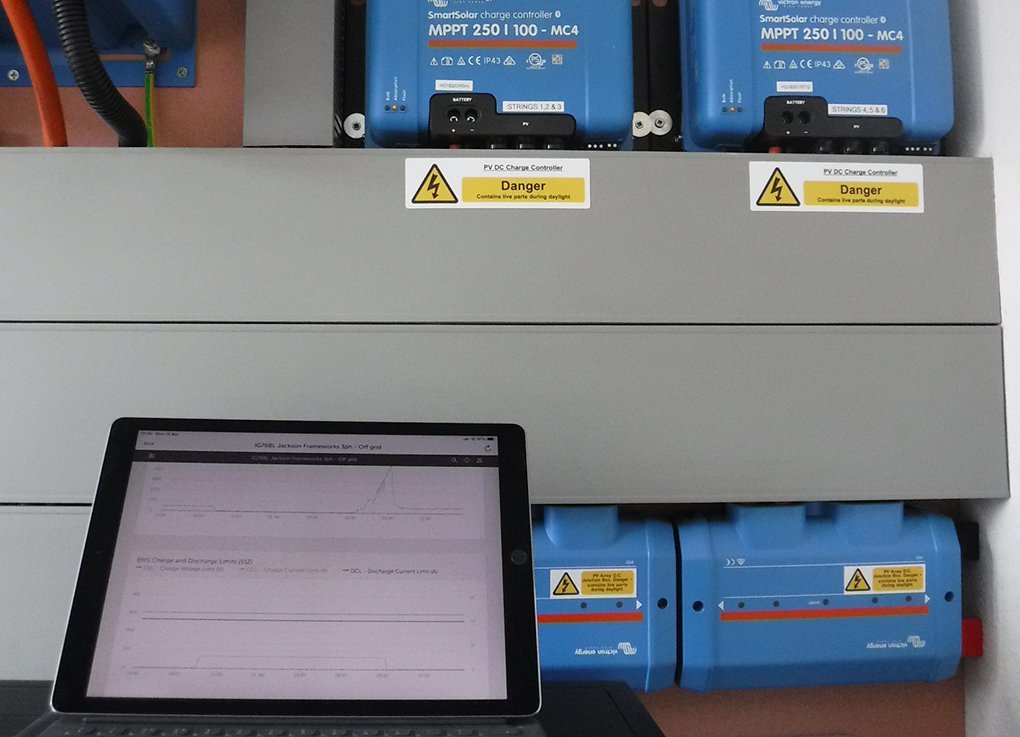 Like many other companies, Jackson Civil Engineering is pleased to contribute to reducing climate change by generating clean, green energy from the sun rather than releasing polluting diesel fumes into the atmosphere. In fact, the site is set to save 26.5 tonnes of Co2 per year. This is the equivalent to planting 133 trees each year! Jacksons have taken the lead by showing other companies their solution and promoting green energy use within other businesses that they regularly work with. It is fantastic that Jacksons have become great advocates of green energy production.

If you would like to discuss your own Off Grid Solar PV project, please get in touch: